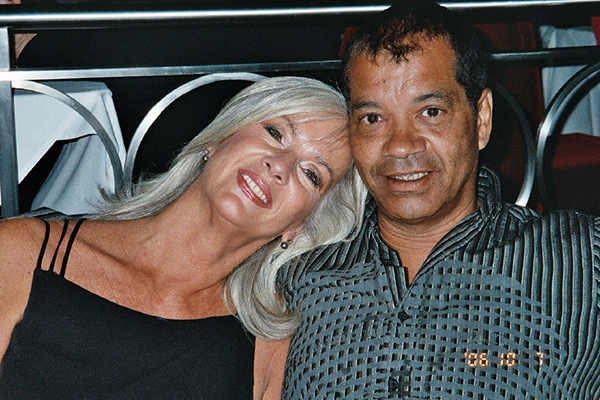 A feature movie is now underway, 14 years after his passing. MCP Productions Marie-Claude Poulin whose movies ‘Rebelle‘ and ‘Brooklyn‘ were both nominated at the OSCARS, teamed up with Les Agents Doubles Lucie and Luce Rozon (‘Just for Laughs’), screenwriter Nicole Bélanger (Canadian Screen Awards nomination for ‘Cross my Heart’) and producer Sylvain Archambault (8 nominations and twice a winner at the Prix Gémeaux, etc.) to revive on screen the singer-songwriter-musician-producer’s amazing life. Having been his manager, publicist & partner, Lorraine was asked to act as a consultant.

Georges Thurston aka BOULE NOIRE was born in the province of Quebec at a time where being orphan and biracial was not an easy start in life. Left at birth on the doorstep of ‘La Crèche d’Youville’, Georges never met his biological parents. Apparently, his father was a professional American baseball player. His adoptive Caucasian parents deeply loved him but at age 9, due to his mother’s illness, he was taken away by bureaucrats as they authorized her to keep only one of her 4 children. Choosing the older one led to a heartbreaking separation…

Then started his round of 21 foster homes. Being a peace & love advocate, teenager Georges rebelled against all the injustices he and his passing brothers were subjected to. His natural leadership led him to spend time in correctional centers. At age 18, he was released with $250 in his pocket and a guitar that was given to him by an anonymous philanthropist.

Montreal record producer Tony Roman immediately spotted Georges’ outstanding talents as a versatile musician (percussions, guitar, keyboards) and composer. Sleeping on the studio’s floor, he was soon recognized as a prolific composer whose hooky songs all had stardom potential. He became very much in demand as he was comfortable in any style of music. Muscle Shoals Studio in Alabama gave him a private room to compose for some of their famous clients as he could easily create personalized hits within a few hours.

Later, his buddy Claude Dubois convinced him to sing. That triggered a successful career with hits across Canada and Europe. Nicknamed “Boule Noire” because of his voluminous afro hairdo, he was the first artist ever to combine French and English on funky beats. He pioneered in the 70’s a style that nowadays artists are adopting. “Aimes-tu la vie?” and “Aimer d’amour” among dozens of other hit songs are still being aired daily worldwide.

Then, in 2006, the terrible diagnosis fell: stage-4 colorectal cancer.  From then on, altruistic Georges used all the media attention to promote the symptoms, avoidance and remedy of this curable disease when detected early. He left us at age 55, in peace, having the satisfaction of having spread his message of TLC (Tender, Loving, Care) as much as he could.  Besides his musical catalogue, his best legacy remains the exemplary courage he indefectibly displayed throughout all ordeals.

Many fans have been asking for a biopic about Georges’ life as he could be the best inspiration and moral booster to so many orphans and children of broken marriages, around the world. They are now cheering the good news!